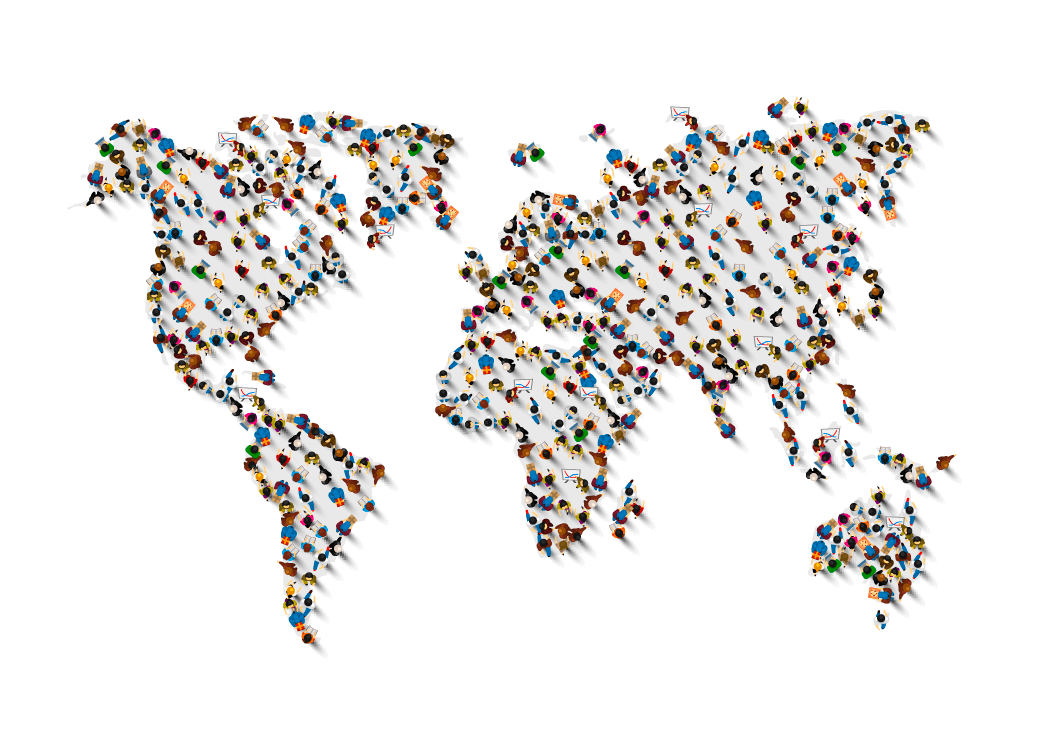 Whether you’re struggling to find a skilled developer for your project or a decent tech job for yourself, you are not alone.

According to the European Commission, 756,000 ICT positions in the European Union alone will be unfilled by 2020.

The reasons are different. The demanded skills in IT change extremely fast, and in some cases, the industry simply lacks specialists who possess the trending abilities. In other cases, it’s all about the work conditions the young workforce demands but companies can’t provide.

One way or another, the war for tech talent is getting global these days. Programming languages don’t differ from continent to continent, so why pay attention to locations when looking for work or offering it? Those companies which struggle to hire locally, are attempting to move the talent they need to their locations.

But is this really the only approach that can help companies avoid a tech talent shortage in 2019?

Relocation in tech is still a trend

Generally speaking, the desire to move abroad for work is declining. But in tech, it is still higher than average. As BCG states, in 2018, 67% of digital experts were willing to relocate. That was 10% higher than the global average.

The willingness to move abroad for work depends not only on the industry but also on the candidate’s country of origin. About 90% of tech specialists in India, Egypt, or Saudi Arabia would like to relocate, while the developers in China and most of the EU countries prefer to stay. The economic stability and pace of development of the IT industry define everything.

The ‘internal’ tech talent mobility also varies from continent to continent. According to CEPS, in the EU, only 0,3% of the population move to another state for work annually. Compare this to the 3% rate in the US, where there are fewer administrative and language barriers for those willing to move.

The portrait of a relocating tech specialist

The same study by CEPS states that most of those willing to relocate have graduated within the past 5 years, usually with a master’s degree. This information should impact the types of perks companies provide to the relocating tech specialists. The priorities of ‘Generation Z’ are neither economic stability nor a high salary. These people are seeking career growth or just an opportunity to live in a different culture.

Our recent study shows that companies are already considering this tendency. According to the research, the most widespread relocation perks in tech are:

All these perks might be useful when attracting young tech talent.

Other trends to observe

As I mentioned above, the priorities of modern tech specialists have shifted. According to the 2019’s Stack Overflow Developer Survey, here are the top-5 priorities for today’s techies:

This list might be a little biased as not all the people can fairly elaborate upon the importance of money in their jobs. But still, companies who want to minimize the talent shortage should keep an eye on the workers’ preferences, and treat their employees like customers.

Political situations and changing tax policies also affect the tech workforce. Countries such as the US, the UK, and Switzerland used to be the most appealing destinations. Now, however, they are less attractive, due to changes in migration policies and trading issues.

According to the survey conducted by Relocate.me, the following destinations are the most appealing for the relocating tech specialists in 2019: 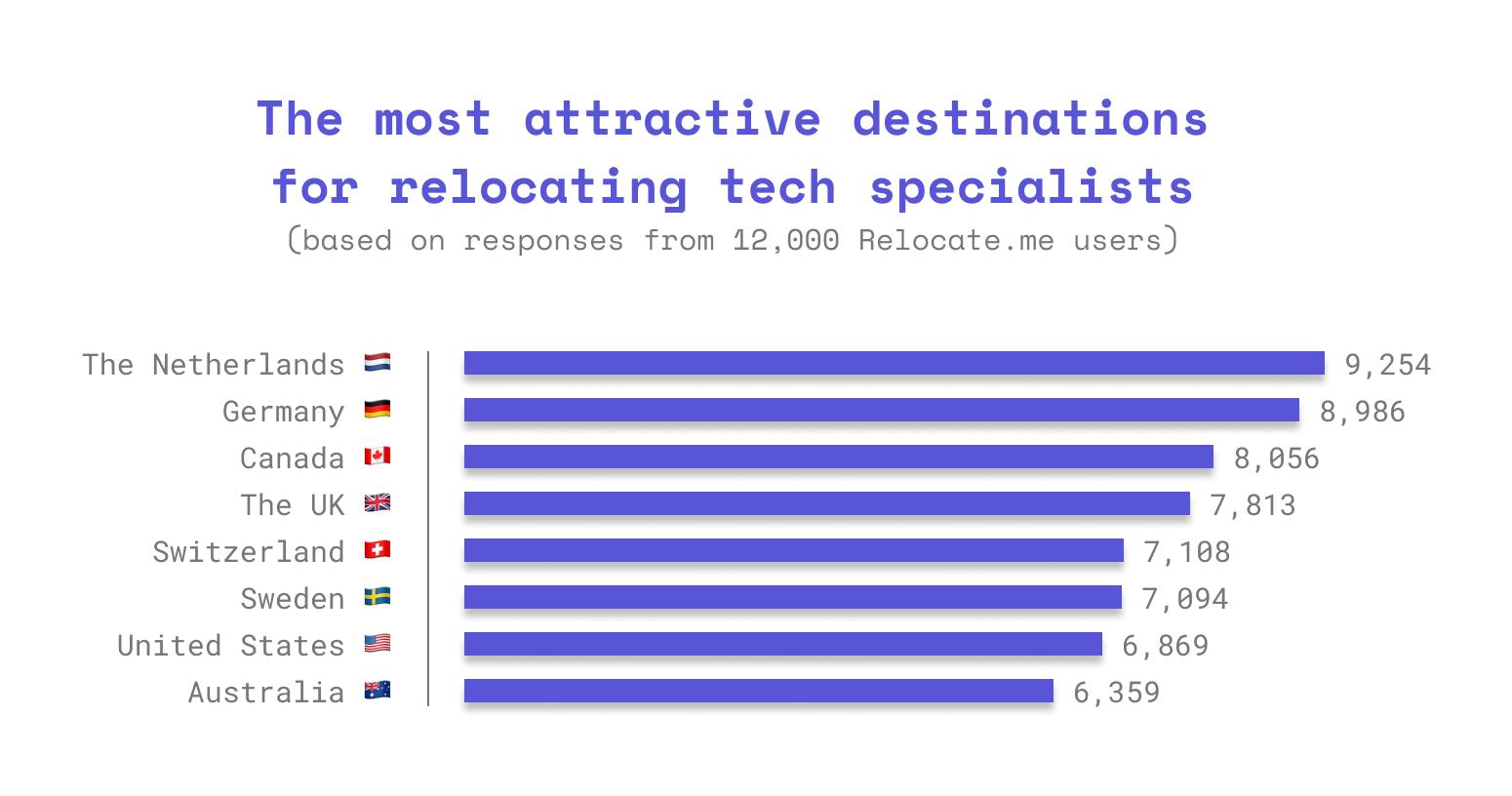 It is worth mentioning that China and other emerging Asian markets are already competing with European and North American destinations. As proof: Stack Overflow reports that in China, 81.3% of developers are optimistic about the quality of life in their country, (putting China on the top of the list).

Digital nomads are another trend worth mentioning. More and more people are choosing traveling and working on the go over settling down in one place. Pieter Levels, the founder of Nomadlist.com, suggests that by 2035 there will be a billion digital nomads in the world. Given the availability of air travel and the popularity of remote work, anything is possible!

For those employers who find it difficult to attract the needed specialists to their locations, internal mobility is an important trend to be aware of. It’s not just job rotation and education programs, (which would benefit every company, of course.) For many mid-sized companies and tech giants, internal mobility also involves expanding to growing markets, such as China or India.

The concept sounds attractive, but it’s often hard to implement. According to this Deloitte Global Human Capital Trends survey, companies which fail to improve their internal mobility are often encumbered by:

Consequently, only 44% of employees believe it’d be easier to find a new opportunity within their organization than outside of it.

Employees’ preferences are changing constantly, due to both social processes and political situations around the world. To avoid a talent shortage, tech companies should adapt to those changes and seek new approaches towards relocating, sourcing, and managing their workforce.

Given the growing interest in freelancing, digital nomadism, and internal mobility, relocation is still a trend. But now, European and North American countries face strong competition with emerging Asian markets. Countries such as China can also attract the best talent from all over the planet, and tech companies worldwide best bear that in mind.

Andrew Stetsenko Tech Talents Relocation
2019-09-26
Previous article
What To Consider When Choosing Your Next Work Destination In Europe
Next article
Recruiter Checklist: 30 Questions To Ask Before Hiring A Tech Specialist